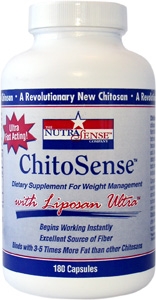 September is Child Obesity Awareness Month. One in three children in the U.S. is overweight or obese, putting them at risk for a variety of health problems, including type 2 diabetes, high blood pressure, and heart disease. But childhood obesity can be prevented by adopting healthy lifestyle habits. One of the best ways to help your children or grandchildren maintain a healthy weight is to lead by example. Eating a balanced diet rich in fruits, vegetables, and whole grain, exercising, and taking supplements are great steps toward achieving and maintaining a healthy weight.

If you need to drop a few extra pounds and find it difficult due to a lack of time to exercise, try a natural supplement that helps eliminate dietary fat by inhibiting the absorption of fat during digestion. Chitosan is a basic raw ingredient, a natural fiber, derived from the shells of crustaceans, like shrimp and crabs. Chitosan acts as a barrier inside the intestines that limits the absorption of fat during digestion. It has been shown to be effective in treating obesity, high cholesterol, and Crohn’s disease.

There are a numerous diet aids and drugs on the market, but many have unpleasant side effects or alter or suppress the natural body functions. ChitoSense, however, is both a natural and safe complement to your weight loss program. It is made exclusively from North Atlantic shrimp shell, sourced from Iceland, and is extremely low in lead and free from pesticides and antibiotic contamination that is often associated with shell produced from third world shrimp farms.

For a limited time, NutraSense is offering HALF OFF on ChitoSense with LipoSan with a best used by date of December 2014. Don’t miss out on this great offer.

SIGN UP HERE TO RECEIVE NEWS AND SPECIAL OFERS!